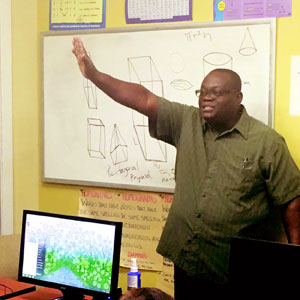 Ian Bobb, CURET alum who recently completed the requirements for his high school diploma, returned to giveback and to inspire fellow students.

In his presentation to students at the Center for Urban Research, Education and Training (CURET), he said: I used to be just like you. I used to face many discouragements. I know what it is like to try to make the grade in math and experienced failures over and over. I know, I know what that did to me. I know what it is like to have a family with kids to support. I know what it is like to attend classes daily, do homework, consumed with self-doubt, thinking, ‘why bother, what’s the point?’ I know how it is to be tired after working on the job; get myself to class and struggle, struggle, struggle with math. But I never gave into the temptation to give up, thinking, wouldn’t it be better to just give up. That was a far-off thought. But I perished that thought every time I was tempted to give up.

Now I’m experiencing the good feeling that success brings. I recall how CURET encouraged me. I know how it feels to be successful and I want that for you too. So don’t give up, work hard and work together as a team, encourage each other, help each other. Talk to yourself and talk together, take a cue from the slogan President Obama used. He said, “‘Yes, you can, yes, we can.’” One of these days you’ll experience the joy I now feel. Believe me, please; I beg you. Stay with the program, keep your goal in front of you, stay focused and let you goal propel you, please!” Indeed, Bobb was authentic in his presentation. A group of students: Veronica, Fay, and Joan, upon hearing and witnessing Ian’s authenticity gave a response: Ian Bobb did a good job in encouraging us.

He told us to be persistent. Sometimes we feel so discouraged, but Ian touched our feelings when he said, “‘I am an example of one who was discouraged. But kept on persisting,’” he said: ‘Push yourself. Don’t give up because of discouragement; don’t allow yourself to fall out; you will regret it.’ That caught our attention, the group in unison said. Sometimes we feel so discouraged, but he told us to push ourselves. He said he was like us. He admonished us with a word of caution, saying, ‘we’ll regret it’ if we give up without investing all of our mental energies. 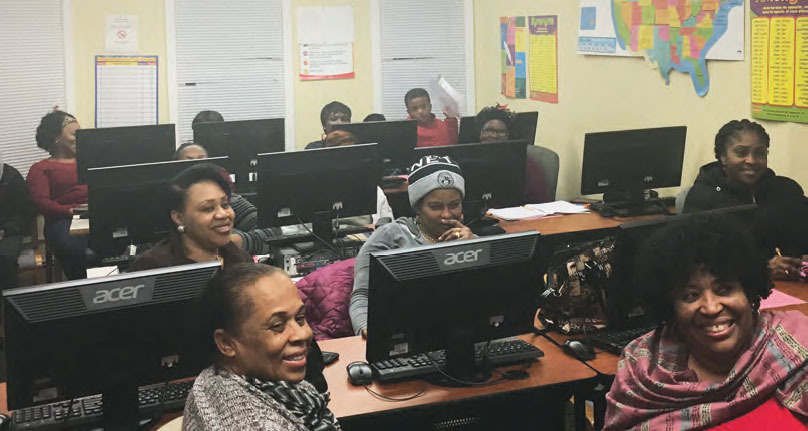 Don’t say, “‘I can’t be bothered. Rather, persevere,’” Ian said. Speaking on behalf of her colleagues, Joan said: “When I heard Ian Bobb admitting to us that he could not do math, that made me feel that he really identifies with us. He said, “‘I used to be like you with that negative attitude toward math.’” “That really lifted our spirits. That was a big motivation for us,” Joan said. “The importance of checking in with classmates and working together offered a very special form of encouragement,” Veronica said. “We call each other and when discouragement starts to set in, we call each other. That gives us strength,” Fay said. We endorse everything Ian shared with us, she said. For Nadine who was moved by Ian’s message: “He was very informative. I’ve experienced a lot of the things he said.

There were days when I doubted myself. I hate math and I’m fighting that doubt. I had such a real identity with Ian. He was vocalizing what I’m experiencing within myself. Because of my dislike for math, I started doubting myself in every way. But when Ian said, ‘Take it one day at a time, it will get a lot easier,’ he inspired me. And the thing that makes Ian so identifiable is that he is a parent just like most of us with family responsibilities and children. He spoke to what we are going through. And when he said, ‘If I can do it, you too can do it too,’ that was such an important statement. And when he spoke about how his life has changed, that really motivated me. Also, he mentioned a very important thing—teamwork— that’s how it is with members of my class at CURET. We work as a team. And to hear Ian’s suggestion on how we can survive when we work as a team, he was right on. ‘When we try to work with each other as a team, that should be fine,’” Ian said. Another student, Gwendolyn said: “Ian’s talk was an eye opener.

So many times I find myself thinking, ‘I don’t think I can go back to school and achieve anything.’ When Ian said, ‘Put your mind to it; you can achieve your goal.’ That caught my attention, Gwendolyn said. Ian really encouraged me and lifted my spirits. We’ll continue to encourage each other and achieve, even when we fall down, we’ll brush off ourselves and start again,” Gwendolyn added. Claudette, another student said: “For me it was enlightening and helps to sooth some of the anxieties I had. I was so nervous about the whole thing of going back to school. But since I’m here, I’m re-assured and I admire Ian’s spirit and how he came across with his slogan: “If one can make it here, we all can, and that we should keep on working together.”

Angela said: “Before I came to CURET, I went to Capital Community College (CCC) to apply to the CNA Certification program, but when I took the test, I scored two points lower than the requirement. CCC advised me to go to CURET and sharpen my math skills and return in three months. When I came to CURET and found out what is offered, I thought it best to stay at CURET, learn more and I’ll do better on the tests. Because of the encouragement I received at CURET, I am taking my time. I was crawling at first, but now I’m walking. I hope to run some day. But I must admit that at times I really feel like giving up. Math is my problem; it’s difficult for me. But I receive such encouragement at CURET. I was encouraged with the strategies I learned and I’m following the strategies. That’s what I’m doing and I can do math better now. Also, I’m learning to work together as a team with my classmate, Hyacinth. We call each other and we work together. I’m so thankful I came here. I remember when I used to count the words when I tried to read. I couldn’t read fluently. But now I don’t count words. I’ve grown a lot in my reading. So I’m very thankful for CURET. Claudette shared another point of view: “I came to this country in 2015. I was searching to further my education, but did not know where to go or how to start. When I heard about CURET and made an inquiry in 2016, I received encouragement and an eye-opener. I was thinking to myself; ‘it’s only a pity I did not get this information about CURET long ago.’ CURET has helped me greatly. If I put in the effort I think I can make it. I really appreciate the program. I am much more enlightened. I feel so confident more than ever upon hearing Ian’s presentation. I am more relaxed. Before, the tunnel seemed so dark. Now I see there is light at the end of the tunnel, and I am striving towards the light. I really appreciate it. This is wonderful.”

Janice, too, as a relatively new arrival to the United States, shared her reflection. “Before I came to America, my children used to encourage me to further my education. But in Jamaica it wasn’t possible for me as a parent with lots of responsibilities. When I came to the USA, my children said don’t rush and don’t put stress on your self. But I often had the lingering thinking that I want to be in a classroom setting. A friend gave me the CURET address and phone number. When I came to CURET the first time, I saw a great opportunity. And as I reflected on that which I did not achieve and always wanted to achieve earlier in my life, now I see the opportunity. And at first I was thinking that I could not accomplish furthering my education. But when I came to CURET and experienced the teamwork, I was encouraged. There is always someone at CURET to whom I can go to get help and information. Besides, CURET is not far from my home. So I am making the effort because I really want to achieve via this educational opportunity. Thanks for making it possible for me to see an opportunity to achieve the education I desire. And thanks to Ian for sharing his story. I’m motivated.” At the end of Ian’s rousing presentation, the group in solidarity pledged with an enthusiastic response, saying, “Yes, we can,” as they raised their hands up high, demonstrating solidarity.