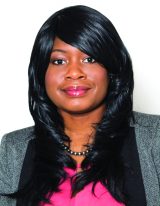 Maxien Robinson-Lewin won the election for president of the Greater Hartford Branch of the National Association for the Advancement of Colored People (NAACP) on Tuesday, November 20, 2018. The election had one of the largest voter turnouts for the Hartford Branch. Robinson-Lewin defeated her opponent Pastor AJ Johnson, leading her entire slate to a landslide victory.

The NAACP was founded in 1909 and is the largest and oldest Civil Rights Organization in the Nation with over 500,000 members and 2200 Branches worldwide. The Hartford Branch celebrated its 100th Anniversary last year.

Robinson-Lewin began her volunteer service within the Greater Hartford Branch of the NAACP in 2013, and is currently a subscribing Silver Life Member, as well as a member of Women in the NAACP.  She has held numerous elected and appointed positions within the local branch as well as the Connecticut State Conference of NAACP Branches. She has served as the Branch’s treasurer, secretary, and Youth Council advisor.

As the Branch’s secretary, Robinson-Lewin is an ex-officio member of all standing committees, but she is an active member of the Education, Health, Membership and Freedom Fund Committees; chairperson of the Freedom Fund Committee—which is responsible for the largest funding raising and membership recruitment in the local Branch and serves as assistant secretary of the Connecticut State Conference of NAACP Branches.

As president of the Hartford Branch of the NAACP, Robinson-Lewin said she is ready to M.O.V.E. the organization along a continuum increasing Membership; creating Opportunity; increasing Visibility; and Economic Empowerment.  During her campaign, she noted that her priorities as president focus on six key areas: Community Awareness; High Quality Public Education; Strengthen Community Relationships; Increase awareness and responsiveness to issues plaguing the community; Community Collaboration; and Economic Empowerment.

According to Robinson-Lewin, “There is a great deal of work to do and it calls for sacrifice and determination on the part of those who are leading, and if men believe that money should be the only consideration for leadership, then there can be no successful achievement.”

Robinson-Lewin resides in Hartford with her husband Ernie and two children.