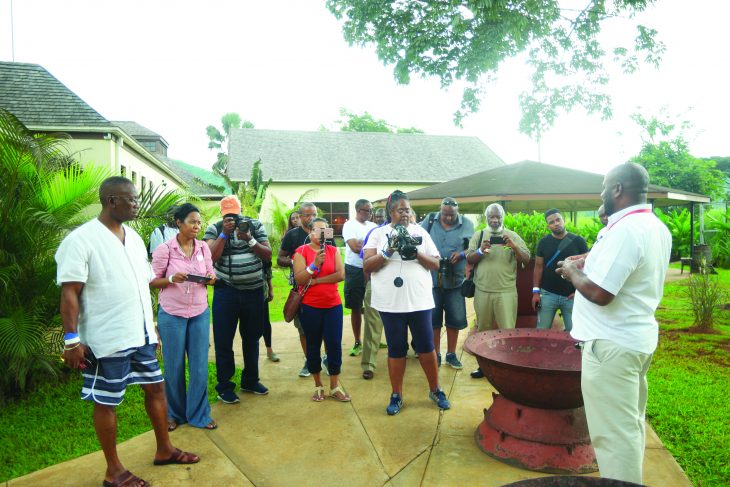 Journalists residing in the Diaspora, particularly the United States and Canada were invited to take a trip during August 2018 to their motherland, Jamaica. After spending days visiting sites, dining, and being hosted at various memorable places in Kingston, the capital of the Island, we were ready for the journey to the north coast. Following a scrumptious satisfying early morning breakfast, we were equipped for the journey.

There was construction ongoing to widen and repair roads and to reroute the existing traffic patterns to accommodate the new construction. The anticipated T3 highway loomed and we entered the tollgate. The ride to the coast was a joy to travel along sweeping undulating views of the interior was a treat for most of us. No more bottleneck stops or traffic back up, just good clean road all the way. The hill of Mount Rosser was hardly noticeable, unless you are familiar with the terrain.

The trip was a good place to get a nap for the passengers of any vehicle. The short snooze revitalized the body for the adventure of Yaaman Adventure Trail. There we got on the jitney tour and took the tour of the great house, the camel rides, and some of the special features of the trip. There were also segway rides, mud buggy rides, horseback rides, and other features that are a part of the interest for everyone that takes the trip and makes the visit to Yaaman.

We then moseyed on to Miss T’s Kitchen for lunch and again got tasty food to fill the cavern of our yawning stomachs. After lunch we checked in at the Moon Palace Hotel, situated in the heart of town and on the shore of the beach. After check-in, we had some downtime for a quick stroll in the town or on the beach and back in time for a dinner hosted by the management of the establishment. After dinner, there was time for a sojourn on the town for a little nightlife and fun. In the morning we were again hosted, this time by the PR manager who met with us at breakfast. After breakfast, we checked out and got ready for the last leg of the trip to Montego Bay.

On the way to Mo Bay there was a short roadside stop at the pudding man in Priory. The pudding like how you know it was done was good; fya a top, fya a bottom, hallelujah eena de miggle, wid pette, pette pon top. Moving along we settled down for the ride to the Tourist capital.

In Montego Bay we checked in at the Jewel Grande Resort and Spa. This is a luxury hotel with large rooms, suites, and an available condo for those that need that much space for comfort. With time for relaxation we took the time to speak with employees at different points in the hotel and got very good feedback. The management team hosted the evening’s dinner that served up a tasty treat of local cuisine. After dinner, there was an event in the ballroom that was packaged for the guests and open to the public. In the morning, we had breakfast at leisure and a site visit with the PR manager. We then got together and left out for the trip to Appleton Estate rum distillery, in St. Elizabeth, the middle of the country.

Going to St Elizabeth from Montego Bay we saw firsthand more of the road construction that was ongoing to improve the infrastructure of transportation. The estate was nestled in the lush area of the cockpit country with greenery all around. We were welcomed and directed to the class of Dr. Joy Spence, the master blender of the company. She is the only woman in the world at this point to hold that title, and also the only one in the Island. The class was interesting, the facts surrounding and supporting the estate was very educational and of course informative to the process of rum distillation. We were given an opportunity to taste and blend our own small mix and to take with us. A gift of an aged bottle of rum was offered to everyone. One main point we all got was the fact that an aged bottle of rum that is sealed will not age another day no matter how long it sits in one’s basement. After the class, the tastes, the tour, and the historical references, we had lunch onsite. Really marvelous! After all that we were moving again, back to the city, the second city that is. We had a good look at the road widening and modifications being done as we returned to St James and our hotel.  By 8:00 pm we were “home” at the hotel and deciding if we had enough energy to do the las’ lick. There was not enough energy for the last lick so that was cancelled and we took the time to relax, really, at the hotel and enjoy the rest of the night, the last night on the Island.

We had breakfast the next morning sporadically and exchanged the pleasantries of departure. This was an awesome experience and afforded the opportunity for us to be witnesses to the strides that the tourism industry has made since it was decided to be an arm of outreach to the global travelling public. This venture was very specific and allowed us a group to be immersed in the matrix of the Jamaica Tourist Board and organizers—Lyndon Taylor and Barney Bishop from FINN Partners, and their method of choice to reach the Diaspora. Come back to Jamaica, “home is calling…come, relax and rejuvenate!” All are in agreement that it was an enlightening, compact and at the same time relaxing trip that rejuvenated us!