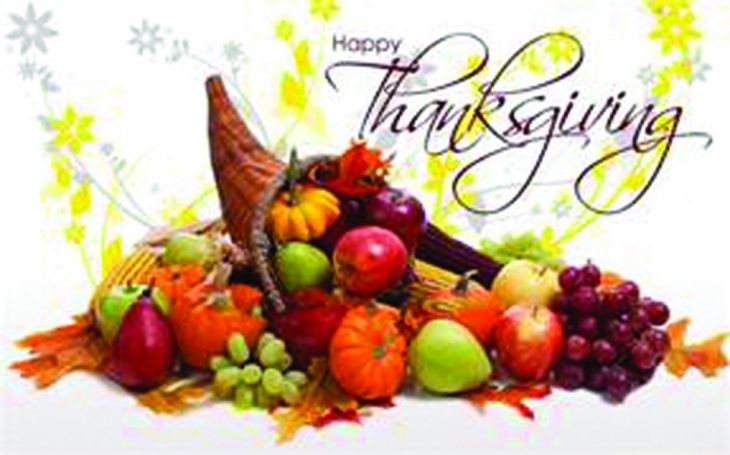 As we celebrate 2018 Thanksgiving, we are reminded of America’s place in history, a history that began with the colonization and settlement by the early colonists known as the Pilgrims. They landed at Plymouth, Massachusetts in 1620, escaping religious persecution in England.

Many died because of the harsh weather. The native Indians were very friendly and helpful to them. They learned survival and farming skills. At the celebration of their first harvest, they invited the Indians to join them at the feast in thanking God for the plentiful harvest, protecting them and providing for them.

Among the physical blessings call for thanksgiving are: peace, deliverance from danger, acceptance of the word preached, growth in grace. Paul in 2 Thess. 1:3: “We are bound to give thanks to God always for you, brethren, as is fitting, because your faith is growing abundantly, and the love of every one of you for one another is increasing.”

As to its characteristics, thanksgiving will always be a dominant feature of Christians’ praise: “Amen! Blessing and glory and wisdom and thanksgiving and honor and power and might be to our God forever and ever! Christians should render thanksgiving continually—Col. 4:2: “Continue steadfastly in prayer being watchful in it with thanksgiving. In Phil. 4:6, Paul declares: “have no anxiety about anything, but in everything by prayer and supplication with thanksgiving let your requests be made known to God.”

The remedy for complaining people, achy with somebody or something troublesome, someone rubbing others the wrong way, the remedy Paul says in Phil. 4:6, “Have no anxiety about anything, but in everything by prayer and supplication with thanksgiving let your request be made known to God. Thanksgiving and the showing of gratitude are the basic and lasting elements of the Christian life. They have healing power.

Today’s world is in great need of Thanksgiving Christians. Christians who have a personal relationship with giving thanks, and a touch of Jesus’ power. Luke 17: 11-19 describes how Jesus met a group of ten lepers who sought healing from him.

Instead of healing them on the spot, Jesus simply commanded them to go and show themselves to the priests, something that needed to be done by lepers who had been cleansed.

As they went in obedience to his word, they found that they had been cured. This story may well articulate memories of the cure of Naaman (2 Kings 4-5: 10-14), but it takes a fresh step forward with the account of how one of the lepers gave praise to God for his cure and returned to thank Jesus.

Jesus’ comment is twofold: a remark on the fact that only one man—and a Samaritan at that—returned to give thanks to God, and a declaration of salvation to the man on account of his faith.

Thus the story is not simply a testimony to the ability of Jesus to cure lepers but is also concerned with the attitude of the person cured. Jesus’ mercy is offered to all people, but they must acknowledge what God has done through him: to faith must be added thanksgiving.

Luke is not content to tell us that this incident took place in a village somewhere on the journey to Jerusalem. He specifies that it happened as our Lord was traveling along the border between Samaria and Galilee.

Mention of the border area between the two, gives the story its first hint of separation, distance, and alienation. Besides the crucial part played by the geographical and spatial details in the development of the story, mention is made that ten men with leprosy met Jesus (17:17). They were the most vulnerable of society. The ten lepers “stood at a distance” and had to shout to make their voices carry across the intervening space.

We know that Jews had no dealings with the Samaritans, and yet among the ten lepers, one was a Samaritan. Here is an example of one great law of life. A common misfortune had broken down the racial and the national barriers. In the common tragedy of their leprosy they had forgotten that they were Jews and Samaritans and remembered only that they were men in need. Verse 13: they lifted up their voices and said, “Jesus, Master, have mercy on us.”

We must note that Jesus did not go to them, touch and heal them as he had done with other lepers (John 5:12-13). He kept his distance and simply told them to go and show themselves to the priests. Only as they went were they cleansed. But by now, of course, the distance between them and Christ was increasing. Suddenly one of the lepers realized that he was cleansed.

He was of course grateful to God; but it is the way in which he expressed his gratitude to God that is crucial to the lesson, which this story has to teach. What Christ expected him and all the others to do was to return, that is to return to Christ, in order to give glory to God (17:18). Nor was it that Christ merely wanted them to thank him personally as well as thanking God, through the returning leper did that. The phrase in 17: 18 “returned to give glory” implies that in order to give true glory to God in this affair, they had to return to Christ.

One leper did return, and it is delighted to see how as he did so all distance and alienation of every kind between himself and Christ, between himself and God, was removed. The need for social separation was gone. He no longer had to stand at a distance: He came and fell at the Lord’s feet. He was a Samaritan, Jesus was a Jew; the national and religious barrier meant nothing now.

True, leprosy had long since brought him together with nine Jewish lepers in a common separation from both Jews and Samaritans, but cleansing had brought him to recognize the divine power of Jesus the Jew and to accept its implications. There is no story in all the gospels, which is as pointed in showing humankind’s ingratitude.

The lepers had come to Jesus with a desperate longing; He had cured them, but nine never returned to give thanks. So often, once a person has gotten what he or she wants, such one never returns and gives thanks.

In times of bitter need, we pray with desperate intensity; the time passes and we forget God. He gave us His only Son, so often we never give to Him even a word of thanks. The best thanks we can give, is to try to deserve this goodness and His mercy a little better. Make this Thanksgiving a special historic one and return to Him. Happy Thanksgiving!