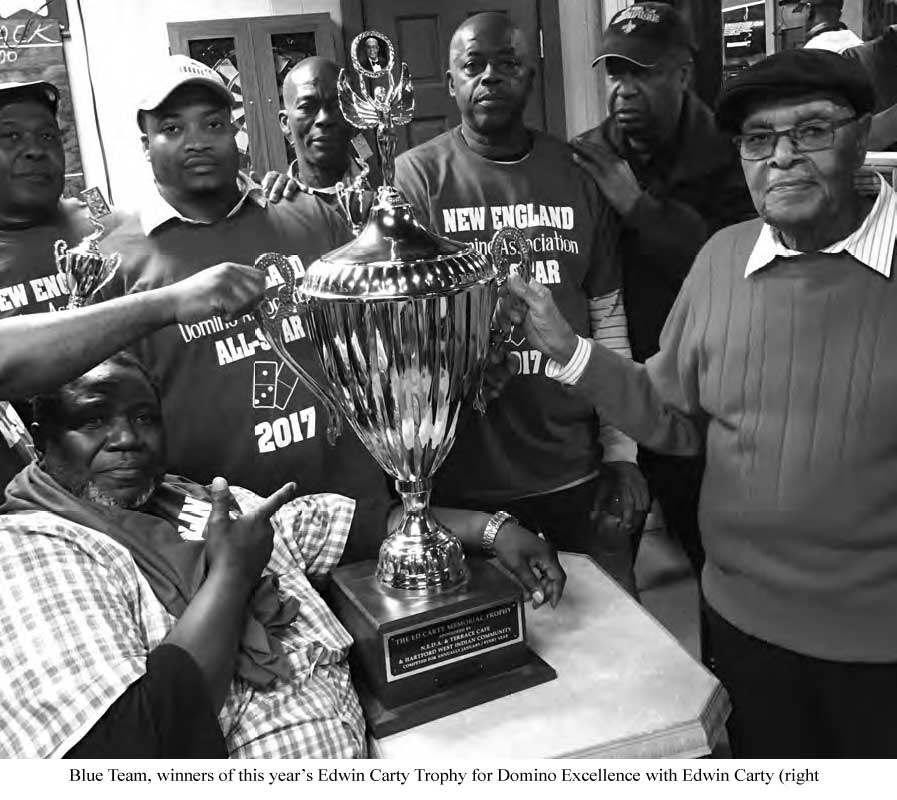 It was a wall-to-wall gathering of domino enthusiasts and players at the Terrace Café, Hartford, CT on Sunday, January 1, 2017. The event was the third Domino Tournament of its kind sponsored by the New England Domino Association. Teams vie for the trophy on the first day of January every year.

The 20 players who were decked out in Blue and Beige T-Shirts as well as the full to capacity crowd of domino enthusi­asts were serenaded by Camille Ismoul’s beautiful rendition of the National Anthem.

Although the event start­ed later than was planned, the New England Domination should be commended for putting on a very organized event. The Terrace Café should also be singled out for the welcoming atmosphere that made the evening most enjoyable.

As the game started, it was evident that those individuals who are accustomed to playing “code dominos” were a bit uncom­fortable. Additionally, from the beginning, one could observe that the Domino Association’s insis­tence that no two players from the same organization should play together did not sit well with players. And one could easily real­ize that the evening’s event would rely on the skill and expertise of each player and nothing else. “Mental Domino” was going to be the order of the day.

From the outset it could be recognized that both teams playing individually and collec­tively went at what they were about with the aim of winning the coveted trophy. The atmosphere was pregnant with silence, which was only invaded by the occasional out­burst from enthusiastic on-lookers.

Despite the ups and downs of the scores of both teams by halftime, judging from the score, it was obvious that the Blue Team had the upper hand. At that time, while on a break, one would have thought that the captain of the Black Team would have been able to assist his team benefit from the observed mistakes. That was not to be. By the end of the game the scores of 154 to the Blue Team and 125 to the Black Team spoke for themselves.

Closing remarks by Junior Miller (Terrace Café) and Clive Clunie (CASH) at the presentation of the trophy spoke volumes as both in their own way expressed grati­tude to the New England Domino Association, Players and guests for making the evening one which will not be forgotten for a long time.

As an aside, Ms. Tyra St. Brice, one of three bartenders employed by the Terrace Café, should be commended for the pro­fessional way in which she handled the crowd of guests who imbibed on their favorite drinks and listened to entertaining tropical music.