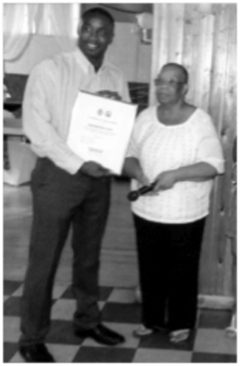 A number of local leaders showed up at the Sportmen’s Athletic Club on Friday, July 20, to participate in a tribute that was paid to Deputy Chief Robert E. Ford Jr., who recently retired from the Police Department.

Ford was presented with a plaque from the club and the Cricket Hall of Fame in recognition of his outstanding contributions to the welfare of the people of Hartford, particularly the work that he did with the cricket-playing community, who thanked him for helping to keep the parks safe.

George Steir, who represented the cricketers, spoke about how he was able to get Chief Ford to reach out to the community by attending several meetings he staged at the club to discuss issues that they were facing at the time. He was thanked for his contributions and service to the community, which he said brought honor to the department and to his profession.

Thanking him for the way in which he served in the community, Hartford Councilman James Sanchez, said that “being a policeman is a difficult job so I am pleased to commend you for the splendid work that you did. Everyone was so pleased with your efforts that they wanted you to be the next chief,” he said.

Speaking of how valuable policemen are to the community, Councilwoman rJo Winch said that this gentleman gives us great support whenever he is called on to serve. “Thank you very much for your efforts.”

Andrew Woods of the Hartford Community Health Care organization spoke very eloquently of Ford. He was always there whenever his help was requested. He always responded to my calls regardless of what incident is taking place. He was of great help to the community.

Deputy Police Chief Sonia Watson said that she was delighted to recognize Ford for his contributions to the community and the department. “I have been involved with him for over 15 years, and can speak proudly about him in the way he carried himself. He was my mentor and I am surely going to miss him,” she said.

Others who took the time out to thank Ford for his services were Donna Daniel, president of the Blue Hills NRZ, Henry Hester of the Friends of Keney Park, and John Davis, coordinator of the Hartford Friendship Group, who commended him for doing a lot for the community.

Master of Ceremonies for the program Dolton James, a member of the Hall of Fame, said that the more he learned about the work of Ford, this has left him to wander if the city knows what it has lost.

In responding, Ford thanked the speakers for going out of their way to honor him. I grew up in the Southend of Hartford, he said, but when I moved to the Northend the West Indian community adopted me. “It was a very wonderful experience which I will cherish,” he said. “We can make our community great, but it is not about what you can do for yourself, but what we do together.” He spoke about his involvement with the youth in the city and the fun which he had with them serving as a boxing coach. “I will not be giving this up,” he said. “It really hurts to be leaving, but I am still a young man and who knows, one day I may come back as the chief.”