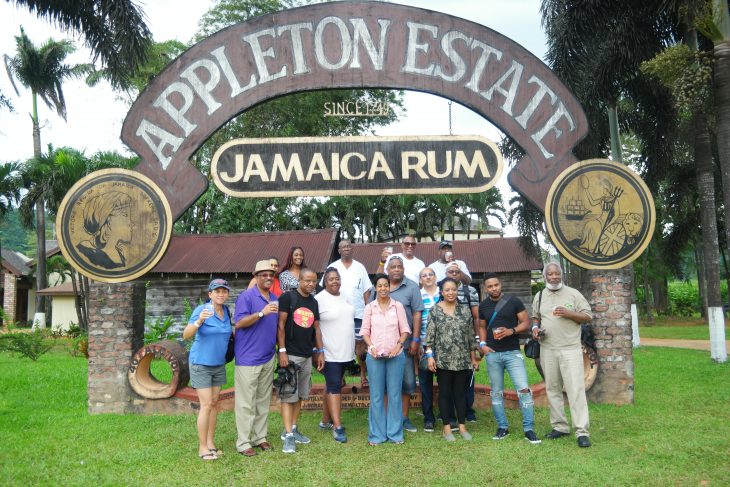 Recently, several journalists in the Diaspora in North America had the grand opportunity to take one of the most exquisite trips of their lives to Jamaica at the invitation of the Jamaica Tourist Board (JTB), under the theme, “Home is Calling; Come, Relax, and Rejuvenate.”

Organizers and Press Escorts for the event were Lyndon Taylor and Barney Bishop from Finn Partners, a New York-based firm that partners with JTB, and Carey Dennis from JTB.

Journalists serving in Hartford and Bridgeport, Connecticut; Brooklyn, Queens, and the Bronx, New York; Ft. Lauderdale and Miami, Florida; Toronto and Vancouver, Canada, accepted the invitation. In the high stress world of media, this trip seemed like a good way for the journalists to relax, rejuvenate, and work on special features about Jamaica, forthcoming in articles, books, and broadcasts; one couldn’t ask for a better trip to document experiences, realities, and to put together reflections.

With the regular required checks and double checks completed, our plane began its acceleration down the runway en route to Jam-down. The flight went well and we touched down at 10:00 am Jamaica time.  There was an official on standby to escort us through the process. The self-serve kiosks were very efficient and we were out in a short time after landing. The guides secured the ride and we were on our way to the joint destinations. The drive to the hotels was very nostalgic for me as it has been over a decade since I took that trip from the airport, except at that time I stayed out of the city and took the coast road to the countryside. The traffic pattern in the city is an indication that there is a renewed effort to control and move the traffic more efficiently, even though that could be up for discussion. We made it to the first hotel and were welcomed by members of the hotel’s management and staff.

After checking in, we went to our respective rooms for a little relaxation prior to the meet-and-greet session scheduled at the Pegasus and got a chance to sample several tasty delights that were prepared by the chef onsite; delightful. With finger food to take the edge off the hunger, we strolled over to the Liguanea Club for the cocktail party. The Rousseau sisters, Michelle and Suzanne hosted the cocktail party.

The drink special from the bar was such a tease, with the lime and fruit drink infused with the local rum, sparkling! Of course, the Liguanea Club’s ambiance is as always, muted yet elegant. The piano bar is a cozy nook for one to be encapsulated within the heart of reggae nation. This was the last stop before we retired for the night in anticipation for the next day’s journey.

In the morning, we had an early breakfast so that we could get on the road early as part of our tour. After breakfast we boarded the bus for the trip up the mountain. The trip was up through Irish Town, with the narrow road meandering on the side of the hills, even at though at times we had to back up to allow another larger unit to squeeze past. The journey up the hill, en route to the coffee farm estate offered beautiful glimpses of the capital city. There were a few stops for pictures of the view of the city and the landscape that abounds. The location is that of Craighton Estate, the presentation about coffee was very informative and needed more than one hour. The passion of the presenter was contagious.

On the ride down from the estates we stopped at an exotic location, EITS Café, for a glimpse. The 50s edition of an Austin Cambridge at the entrance gives an idea of authenticity. Delicately and securely perched on the slopes of the mountainside. This café offers a view of the city and surrounding landscapes from any seat in any of the rooms chosen to sit.

The two bar counters have spectacular views for the patrons. Steps leading down to other seating areas are just as great. A very special attraction is the number of bird feeders that are there, with the exception that these feeders have a kind of nectar that attracts mainly if not only the hummingbirds. I have never seen so many hummingbirds in one place and not scared of human presence.

The natural juices that were prepared on the spot were a real treat for us, having become accustomed to canned or bottled natural juices. The bammy was as it should be, soft and tasty.  Moving on in the trip we navigated the mountain road and made a food stop at Papine. There we had a treat of patties from Tastee, Mother’s and Juci-Beef, our choice of whichever. Tastee was my choice.

At this point with much to do and in little time we took our treats on the road and headed for the Culture Yard in Trench Town. The ride was memorable for some of the visiting crew as they were in the corporate area and in the industry for years before migration. The Culture Yard was the epicenter of the genesis of Bob Marley and the Wailers and other stalwarts of the Jamaican music scene.

The hostess on location was Sophia, the daughter of former singer Brent Dowe. She was very knowledge about the creation, existence, and duration of the area known as Trench Town, dispelling the myths of the name as due to gullies and drains. Artifacts of Bobs’ and pictures of contemporaries and mentors are still visible. With a good dose of second-hand smoke filled with the essence of “high grade,” we regrouped and returned to our domiciles in the uptown area.  Jamaica like everywhere has its own share of rough spots and hard areas, however we did not experience the dread some visitors seem to get.

After a refreshing rest, we were on the move again, this time to have dinner at Gloria’s Restaurant. We were attempting to get in on the downtown waterfront scene, however the resurgence of this area as a night spot is a good thing and as a result we were unable to secure a spot for our group so then we went across to the area that was once called the “wickedest city on earth,’ Port Royal.

The scene here was almost similar to downtown in terms of crowd; however, our guides were able to secure enough space for us to dine. The food as you can expect at Port Royal, was fish-based, all different styles of preparation. An open-sided dining room filled to capacity with laughing talking people was a real treat to island-style eating. The conch soup, which preceded our meal, had enough of a spicy kick to titivate the taste buds. Escovitch, steamed and brown-stewed fish with all the side dishes were feasts fit for local foreigners. After fully satiated we returned to our respective hotels to rest and recuperate for the journey up to the North Coast, eight rivers—Ocho Rios. What a trip of a lifetime! Stay tuned, more in upcoming publications.