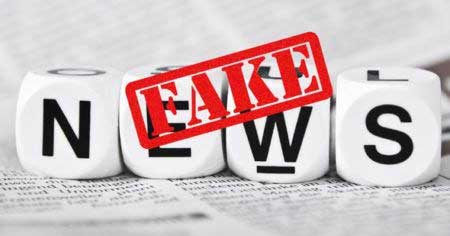 Spurious news is not a novel practice. However, in our modern-day society the floodgates of fake news flung wide open and took on a life of its own, usually with devastating consequences. The phenomenon has a comfy home in the Internet, the social media environment in particular, with boundless possibilities to reach more people more quickly. We became aware of the phony news blow-up during last year’s presidential campaign season and how it confounded things.

According to the Pew Research Center, 62% of U.S. adults retrieve their news from social media sites; and 64% believe that fabricated news stories create confusion about the facts of issues and events with some flashy, eye-popping headlines.

For example, here are some of last year’s bogus, sensational headlines: “FBI Agent Suspected in Hillary Email Leaks Found Dead of Apparent Murder-Suicide”; “WikiLeaks Confirms Hillary Sold Weapons to ISIS”; “Pope Francis Shocks World, Endorses Donald Trump for President;” and “Trump to Nominate Chris Christie to Supreme Food Court” attracted readers with the sensational headlines they muddled some people’s judgment in that they could not distinguish between real and fake news.

With the onslaught of phony news, questions are raised surrounding the proliferation of fake news, some of which include: Is there concern when fake news is considered a tad bit fake and is not questioned? Who decides what is true? How about the so-called real news adding scantily fact-less opinions? Who states what is actually real versus what is bogus? Are opinions really considered on the fringe? Is it controversial to verbalize news with a flare of satire or take an objectionable stance? What about hidden bias in media outlets? Are there muddled fact-checking decisions that are not always black and white corrected? And how can consumers be helped to know when their news is fake?

Some may argue that it is quite clear to distinguish between blatantly fake and legitimate news reports. There are significant numbers of naïve persons who believe anything, regardless of the source and may have difficulty discerning headlines without considering the context on social media websites. For instance, during the 2016 presidential campaign, Facebook was scrutinized for allowing false news reports to run wild. One can only wonder if fake news had an influence or manipulated how people voted in the recent presidential election. If so, it certainly served a secondary purpose.

In a survey conducted by Ipsos Public Affairs for BuzzFeed News, fake news headlines fooled 75% of American Adults. In addition, the survey ascertained that people who relied on Facebook as a major source of news are more likely to regard fake news headlines as accurate than those who rely less on this platform for news. The BuzzFeed analysis found that pro-Trump and anti-Clinton stories outperformed real news on Facebook.

Facebook has announced that it recognizes the spread of fake news and plans to implement new tools to make it easier for users to flag fake stories, as well as collaborate with Poynter Institute to independently investigate claims.

What is more, the aftermath of faulty news reports is a powerful driver of Internet revenues and profit. Consumers click on ads on social media websites that have fake news and those writers or organizations can make money. Posting, sharing, re-sharing, liking, commenting, clicking on banners, and tweeting produce analytical, behavioral, and demographic data that are then packaged and sold. For example, with Pizzagate, which was shared by various fake news platforms, one can easily deduct the political smear and propaganda, generating revenue.

Given our technological age where there are massive platforms for political information, opinions, and dialogue, people in essence can make up whatever with no accountability. And this is a consequence of advancements in Information Technology. There is no gatekeeper and it seems like it would be difficult to immediately filter out fake news in real time.

There is a constant flow of some people crafting erroneous articles that are highly shareable within seconds. And some consumers may not even read the content of the news article and share it with others. Furthermore, some consumers may gather pieces of information from here and there without considering the source and then formulate distortions. Accepting such falsities is scary, especially if this becomes the norm.

What then does this mean for democracy? What about the First Amendment and is it tied to accepting limitations on citizen’s constitutional rights? Is it really protecting free speech or endangering lives? Should the government get involved and make modifications to the First Amendment, and is that even possible? This is worrisome and what would be an alternative? What about misinformation for cyber hacking and the impact on society, particularly the recent revelation from intelligence officials concluding that the Russian government hacking into the Democratic Party organizations was an endeavor to tip the election to Trump.

I can only contemplate Obama’s words at his end-of-year press conference: “What is it about our political system that made us vulnerable to these kinds of potential manipulations, which as I’ve said before were not particularly sophisticated?”