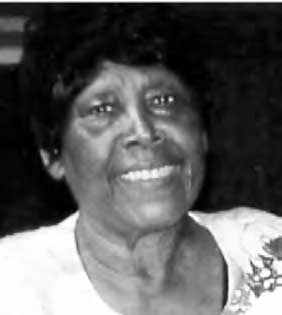 The large crowd that turned up at the Sanctuary of Faith and Glory on Saturday, January 7, to join in the celebration of the life of Missionary Lillian D. Moore, who passed away on Saturday, December 17, 2016 at the age of 76, heard all of the speakers testify about their love and affection for this very energetic and compassionate woman, who dedicated her life to helping others, while doing the work of the Lord.

“She was no ordinary person,” said Dr. Matilda Jones while delivering the sermon. “She never preached or sang but was a cheerful giver who through her faithfulness, strength and accomplishments, have forced us to conclude that the world needed her. Her life was well spent.”

Representatives of the church who came in from Jamaica, Canada, New York, and Washington to pay tribute to their beloved Sister Lillian, declared that she was a strong, determined, loving, trustworthy, and wonderful woman.

“We have suffered a great loss,” they said. “She will be a soul well missed.”

Born in the parish of St. Ann’s, Jamaica, Sister Lillian, the last child of a family of nine siblings migrated to the U.S. in October 1968, as a domestic worker and settled in Montclair, New Jersey. In 1970, she moved to Hartford, Connecticut, where she worked at the Aetna Insurance Company for 30 years and at Travelers for five years before retiring in 2002. During her early days in Hartford, she became a respected member of the Sportmen’s Athletic Club in its founding years. Being a great cook, according to then president Michael Chambers, she was famous for producing a “mean” curry-goat meal at functions held at the club. “Because of her association with the club, no one would have thought that Sister Lillian would have been instrumental in the founding of a successful church,” Chambers said, adding that she may have had the vision then, because unbeknown to members of the club, while making her contributions, she was going to church and making sure that her children attended Sunday school.

So when she accepted the Lord and the time came for her to break away from the club, she did not find it very difficult. With the call of God upon her life, she became a member of Grace Tabernacle Church and later a founding member of Good News Release Center of the Prophetic Church of God, where she was a very active and devoted missionary. It was Sister Lillian who took the lead role when it came time to start the church, it was learned. It began with just five individuals and because of her dedication, commitment and hard work the church is today standing on solid ground.

After retiring, she traveled the world and became a full-time entrepreneur. As a businesswoman, she worked out of her truck selling her goods to farm workers and giving to people in need. In addition to her four biological children, she was a mother to many others as a disciplinarian, humanitarian, and compassionate matriarch in her community, church, and family.

Her hospitality transcended beyond her missionary work with the church. She was always willing to help others and incessantly welcomed people into her home. In addition to her generosity, Sister Lillian was also a strong advocate for education.